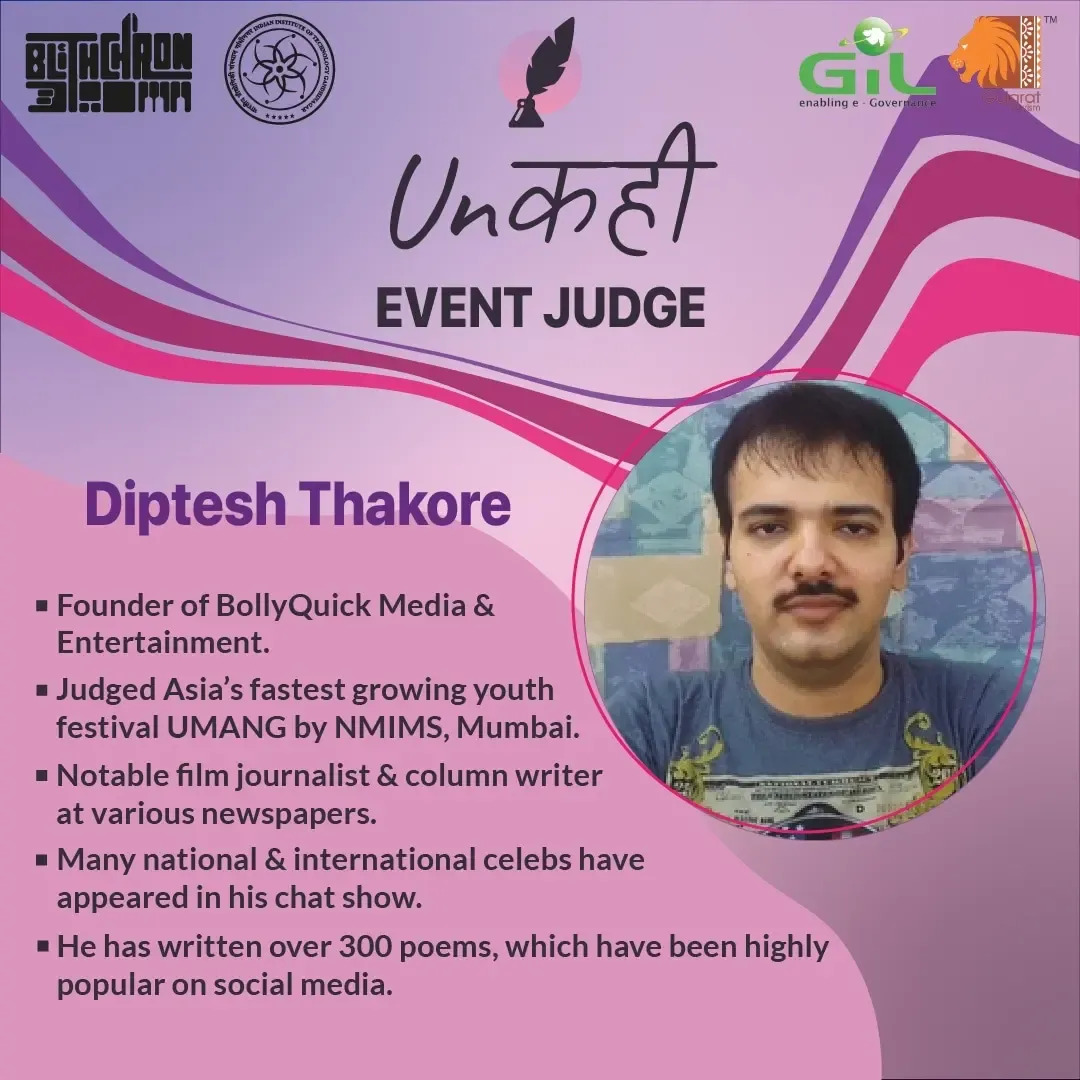 Official Instagram handle of IIT Gandhinagar's Blithchron made this announcement on their social media handle. They wrote in the caption "The founder of BollyQuick Media and Entertainment, Diptesh Thakore is a notable poet, film journalist, casting director, producer as well as a column writer for newspapers. Having published well over 300 poems in his career, he has presided over UMANG, Asia’s largest growing cultural festival as the main judge. He has an active social media presence, and has conducted interviews of numerous high-profile celebrities as a journalist. We’re honoured to have you on our Unkahi Judge Panel, Mr. Thakore!"

On this occasion Mr. Diptesh Thakore Founder of BollyQuick Media & Entertainment and Founder Chairman of BollyQuick Institute said that, "It's really an honored moment for me that IIT gandhinagar invited me as a judge for UNKAHI poetry competition of Blithchron Youth Festival. Poetry helps students in many ways. Poetry encourages creativity which helps students to think out of the box. Poetry also helps in improving languages skills such as vocabulary. So I would like to thanks the entire team of Blithchron Festival that they have included Poetry Competition in their fest. I would like to congratulate entire team of IIT Gandhinagar, Blithchron & Unkahi for organising such a wonderful competition. I want to wish all the students of IIT Gandhinagar & Participants of UNKAHI all the very best."

UNKAHI competition of IIT Gandhingar's Blithchron Fest is on 19th March 2022 via online mode. Judged by some of the best contemporary Indian poets and shayars, with pan-India participation, Unkahi will make you fall in love with poetry all over again!
About Blithchron
Blithchron is the Annual Cultural Festival of IIT Gandhinagar. It is the biggest cultural festival in Gujarat and has been named the National Youth Festival of Gujarat by the Government. Every edition brings together ecstatic events which are the amalgamation of music, dance, and art. The fest showcases events like fashion shows, “The Butler Did It”, Antarangee, Panache, Jobless, the rock competition “String Theory”, a dance competition “Synchronize” and many more. Blithchron also organizes Pronites every year where artists from various cultural fields come and put up a show worth remembering. Blithchron has had artists like Nucleya, The Yellow Diary, Ayushmann Khurana, to name a few.
About IIT Gandhinagar
Indian Institute of Technology Gandhinagar (also known as IIT Gandhinagar or IITGN) is a public technical university located in Gandhinagar, Gujarat, India. It has been declared to be an Institute of National Importance by the Government of India. Established in 2008, IIT Gandhinagar campus is spread over 400 acres of land along the river Sabarmati.
Tags: News & Updates
Previous Post Next Post